9 Types of christian fasting mentioned in the Bible

For Christians, fasting is more than just abstaining from food. It is a time of sacrifice and setting apart, which allows the believer to come closer to God. The word “fasting” comes from the Hebrew word “Tswm” which means “to cover” the mouth, or from the Greek word “nestuo”, which means “to abstain”. In a spiritual context, it means abstaining from eating and drinking, to seek the face of God.

Types of Fasting Mentioned in the Bible

The Bible mentions and gives us examples of total fasting, water fasting, partial fasting, and fasting from other things. All kinds of fasting should be done with the desire to draw closer to God, to hear his voice, and to grow in our walk with him. That should be our motivation in fasting.

Fasting is voluntary. We choose to ignore for a time the need to eat, drink, or anything else to focus on feeding our spirit and seeking the presence of God in a special way. find the type of fast mentioned in the bible below.

This is the most radical fast we can do. In this you do not eat or drink anything, and the body does not receive any type of nutrients. In the Bible, we find an example in chapter 4 of the book of Esther.

Go and gather all the Jews who are in Susa, so that they may fast for me. For three days do not eat or drink, day or night. I, for my part, will fast with my maidens as you do. When I complete this, I will appear before the king, even if it is against the law. And if I perish, may I perish!
(Esther 4:16)

Esther, her maidens, Mordecai, and all the Jews of the city of Susa decided to spend three days and three nights without eating or drinking anything before Esther went to speak with the king. She was going to beg for the life of her people. We see that she is a very radical fast, but the critical situation deserved it.

Total fasting should only be done for short periods of time, for example, 6, 12, or 24 hours. It is very important not to do this type of fast for more than three days. It is advisable to do it under medical supervision since the body does not receive any type of nutrients and it can be dangerous to health.

This is the best-known type of fast. You don’t eat anything, but you can drink water. Allowing yourself to hydrate can be a little longer than a total fast, but it is also advisable to consult a doctor, especially if you plan to spend more than two days with only water.

It is thought that this was the fast that Jesus did for 40 days just before beginning his ministry. The Gospels mention that Jesus stopped eating and was hungry, but they do not say that he was thirsty. We read in the Gospel of Luke:

Jesus, filled with the Holy Spirit, returned from the Jordan and was led by the Spirit into the desert. There he was for forty days and was tempted by the devil. He did not eat anything during those days, after which he was hungry.
(Luke 4:1-2)

There are people who decide to incorporate fruit juices or water with lemon drops when doing this fast.

Partial fasting is a type of diet that consists of eliminates certain types of food. The idea is to eat simply to keep the body functioning without overeating or eating for pleasure. In the Bible we find the example of Daniel, we see how he practiced this fast for three weeks.

Daniel stopped eating special foods (elaborate or tasty) and meat. He also stopped drinking wine. This fast of Daniel is very well known and followed since it is less radical. It is easier for people who have a health condition that does not allow them to perform another type of fast.

On that occasion I, Daniel, spent three weeks as if in mourning. In all that time I did not eat anything special, I did not taste meat or wine, nor did I use any perfume. (Daniel 10:2-3)

This fast can be longer since only certain types of food are eliminated and the body wears less. There are people who decide to stop eating meat, others leave aside desserts, sweets, or treats. It is quite common to drink only water instead of juice or soda during this fast.

4. Fasting from other things

The Bible mentions another type of fast that has nothing to do with food. It is about putting aside for a while things that are not food. For example, Daniel stopped wearing perfume when he did the three-week partial fast (Daniel 10:2-3).

In 1 Corinthians 7:5, we also find the example of abstaining from sex in marriage for a short time in order to devote oneself to prayer. This must be done by mutual agreement of the couple.

Today we see people who decide to refrain from the use of social networks or television for a few days since they want to use that time to go deeper into their relationship with God and focus on seeking his will. This type of fast can be combined with a partial fast.

Whichever fast we choose, the most important thing is to dedicate that time to seeking more of God. The emphasis should be on spending time with him, praying, worshiping him, and reading his Word. It should be a time when everything else takes a back seat to delight in listening to our Father and receiving what he wants to give us.

5 Examples of Fast mentioned in the Bible

The Bible tells us of many times fasts were taken by different characters, for different purposes. Here are 5 of the most famous biblical fasts.

1) The fasts imposed on the people of Israel

Fasts can be solitary but also communal. The Law that God gave to the nation of Israel commanded them to fast during the celebration of the Day of Atonement  (Leviticus 16:29-31). Fasting was appropriate on this occasion because it reminded the Israelites that they were imperfect and needed God’s forgiveness. But these are not the only fasts made by the people of Israel. On their return to Jerusalem, the Israelites fasted to show God that they sincerely sought His help (Ezra 8:21-23).

ALSO READ  can you lose your salvation As A Christian?

According to the Bible, in the book of Esther, the eponymous character is a young Judean girl, who became the wife of the king of Persia Assures. When she learns that Minister Haman has ordered the extermination of all Jews, she prescribes a three-day fast before going to plead the cause of her people with her husband. Esther thus makes it possible to save the Jewish people. Esther’s fast is therefore a strict 3-day fast without any intake of water or food.

To read also:   The stages of true repentance: the example of David!

There are two references to fasting in the biblical book of Daniel. In the 1st chapter, Daniel and his three friends practiced a fast by eating only vegetables and drinking only water. In the 10th chapter, Daniel fasts again, abstaining from eating “pleasant food”: meat and wine.

4) The Fast of Jesus

Jesus also fasted for 40 days! After his baptism, Jesus fasted 40 days (without food or water) to prepare himself to do the divine will during his earthly ministry (Luke 4:1-2).

5) What about Lent then?

Lent is a time of devotion to God, associated with alternating days of complete fasting and days of abstinence lasting 40 days. Lent was instituted by the Catholic Church in the fourth century, in reference to the forty days of fasting of Jesus Christ in the desert and the forty years spent in the desert by the people of Israel between their exit from Egypt and their entry into the promised land. During Lent, Catholics are encouraged to spend time in prayer, penance, and almsgiving.

Whatever fast you choose to do, remember that it is not just about starvation. Fasting before is a time that encourages setting aside, being silent, and thus being receptive to the Word of God. 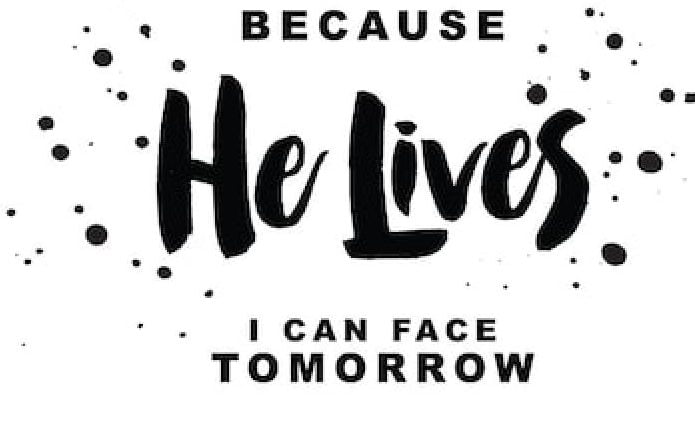 10 Scriptures to go with the song because he lives