Joseph Coat Of Many Colors: History, Symbology and Teachings

Joseph Coat Of Many Colors: History, Symbology, and Teachings

Joseph’s robe was a great symbol in the story of his life. This is one of the most fascinating stories in the Bible. But he was quite unfortunate early in life: hated by his brothers, sold into slavery, falsely accused, and then imprisoned for the crime he did not commit.

This story will help us understand that sometimes things happen beyond our control. As children of God, we can learn spiritual ideas about how to handle the many setbacks in our life.

Simply put, Joseph experienced God’s presence and protection in the midst of various adversities and uncertainties in life. Let me share with you the explanation of why Joseph’s robe made a difference in every aspect of his life, and the lessons we can learn from this story.

See also  Why Jesus Is The Reason For The Season

The first garment that gets Joseph in trouble is the multi-colored coat that his father made for him. The text says: “When his brothers saw that he was the one their father loved more than any of his brothers, they hated him and could not bear to speak to him peacefully” ( Genesis 37: 4 ).

Did Joseph flaunt his special gift in front of them? Or was it simply the fact that his father favored him with a beautiful gift that upset them so much? Obviously, it is a very special garment; the term is used only once more in Scripture, referring to the garment worn by King David’s daughter, Tamar, which probably indicates her royal status ( II Kings, 13:18 ).

At the very least, we can assume that Joseph wore it with pride. In any case, when Joseph approaches his brothers when they tend to their father’s sheep, they plan to kill him.

Only Rubén’s intervention saves Joseph’s life. The brothers take off his coat, throw it into a well, and then sell it to a caravan of Ismailis.

Then they take Joseph’s coat, fill it with the blood of a goat that they had slaughtered, and take it to their father. Not wanting to lie to their father, the brothers say “We found this; do you recognize it? Is it your son’s coat?” ( Genesis 37:32 ). Joseph’s robe was recognized by his father! Who said: A wild beast devoured him! Joseph is in pieces! ”

There were unintended consequences: Jacob no doubt thought that the gift of a beautiful coat would make up for the fact that Joseph, one of the younger brothers, would be teased by his brothers. Perhaps the gift of a coat would make him feel special.
Not only is Joseph stripped of his garment, but the garment itself (along with his dreams) triggers the jealousy of his brothers.

Joseph is taken to Egypt and bought by Potiphar, an official of Pharaoh’s court. He succeeds quickly, with God’s help, and his teacher finds out, putting him in charge of everything in his house. Everything, that is, except Potiphar’s wife, who tries to seduce Joseph.

This man desperately tries to reject her, but when they were alone in the house, “she grabbed him by his clothes and said,” Lie with me! “Joseph left the garment in the woman’s hand, fled and ran” ( Genesis 39:12 ).

Joseph does everything well; but his garment, not the coat of many colors that he had before, but an indescribable piece of clothing, will betray him. Potiphar’s wife shows the garment first to the household servants and then to her husband, accusing Joseph of trying to lie with her.

So perhaps the loss of this second garment was as significant as the loss of the first, the coat of many colors. It certainly has a similar effect, once again causing Joseph to descend, this time to prison. Clothes, in themselves, of course, do not cause evils. But whether elegant or simple, an item of clothing can incriminate a person.

The tunic of Joseph “The Governor of Egypt”

Joseph found favor with the head of the guard, and with other people for this wonderful gift that our Lord had given him. But there was a very important interpretation “that of Pharaoh’s dream” “the dream of the seven fat cows and the seven skinny ones”. Joseph told Pharaoh that seven years of plenty and seven years of famine were coming, but that in the seven years of famine they could gather provisions for difficult times.

He also advised him to put governors in the country who would be able to do what God had ordained through that dream. Pharaoh was quick to react, and he thought that he would never find in all the earth a man as wise as Joseph, who would always have God’s favor with him. After this thought, he ordered that it be Joseph himself who governed his lands.

God’s word was fulfilled; The seven years of plenty occurred in Egypt, and as they had planned, they collected the provisions that were to be used in the time of famine. After this time passed, the seven lean years arrived, but the town never suffered from hunger. 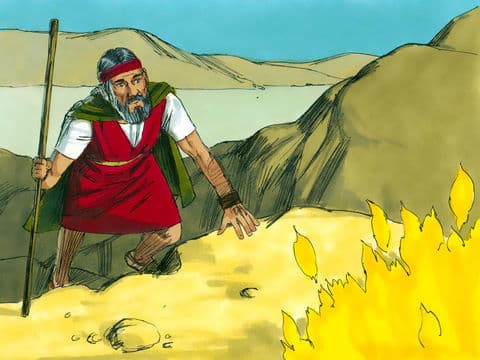 Powerful Lessons to Learn from the Life of Joseph

Joseph’s tunic is something very representative in this story since it was what made the difference in all the cases that this man of God went through. But in addition to the fact that robes can incriminate an innocent person, there are many other lessons we can learn from this wonderful story:

1. Jealousy can ruin a family relationship

Children who fight each other, even in the best homes, can be bad enough. But in Jacob’s house, it turned into a serious sibling rivalry. This is because Jacob had favored Joseph more than any of his other sons.

Aside from the beautiful coat, the unusual dreams made his siblings more envious of him. Later, they literally thought of taking his life out of jealousy. When an opportunity presented itself, they threw him into the cistern or well and had to make up a story to hide the truth from their father.

2. Joseph’s tunic had been removed, but not his person

The gift of the coat did not make Joseph feel loved by his brothers. When his father gave him a beautiful coat with many colors, his brothers became jealous of him. As a result, his elegant coat was taken from him and thrown into the cistern.

Interestingly, even though his coat had been removed, he was able to maintain his character and integrity. He may not have been wearing a beautiful coat as a slave, but his character stood out among other slaves in Egypt . Instead of elegant clothes and an external appearance, there is no doubt that the personality is the best ally to earn the respect and trust of others.

3. We must be diligent and productive workers

Joseph was a diligent young man. When he was brought to Egypt as a slave, he worked hard in Potiphar’s house. Joseph was able to ensure that he was doing his best, especially in managing the food crisis in Egypt.

The message is quite simple: always do your best in the workplace. Paul reminded us to always give ourselves fully to the Lord’s work because we know that our work in the Lord is not in vain ( 1 Corinthians 15:58 ).

4. God protected him in the midst of trouble

Joseph was thrown into the cistern by his jealous brothers and eventually sold to merchants as a slave. Later, he was accused of raping Potiphar’s wife and was imprisoned. In the midst of danger and adversity, God protected him because of his faithfulness. Joseph remained faithful to God instead of complaining, in return the Lord kept him.

5. We must flee from sin at all costs

Joseph was handsome, smart, cunning, a born leader. No wonder Potiphar’s wife fell in love and tried to seduce him. The Bible says that she grabbed him by the cloak and said, “Come to bed with me!” But he left his cloak in his hand and ran out of the house ( Genesis 39:12 ). Have you ever felt that you will never get over sin and temptation in your life? Follow this example.

6. He was promoted and blessed

Joseph’s promotion brought him bigger roles and responsibilities. Because of his unquestionable character and wisdom, Joseph was able to save two nations from famine, Israel and Egypt.

You will not achieve things overnight, true prosperity will come through hard work and being fair in all your dealings. Like Joseph, you must be more diligent and seek a relationship with God first so that you can be blessed.

When Joseph met his brothers in Egypt, he was now a leader and they did not recognize him. Joseph’s dreams came true when his brothers bowed to him respectfully. This would have been a perfect opportunity for revenge, but he didn’t.
Instead, it helped them.

See also  What does it mean to redeem according to the Bible
Final Words:

As we have been able to notice throughout history, Joseph’s tunic always played a very important role; was what identified him at all times. For his clothing, he was the object of envy, for his clothing he was incriminated, and with this, he was also exalted before all the people of Egypt and before his brothers, who had sold him as a slave.

This story is an excellent example that with God’s help, we can achieve everything and that if God is with us, even if we are in the darkest pit, he will know how to get us out of there. Many times we go through difficult times and we complain, or we say that God is punishing us, but the truth is that our Lord always has a goal or a purpose.

Look at all that Joseph had to go through to become governor! He was envied by his brothers, handed over to merchants, sold as slaves, accused, and unjustly imprisoned. If all these things happened to you, what would you think, or what would you do? It is important that we learn to be patient and wait on God because he has the best purpose for our life.

10 ways to increase your spiritual sensitivity

How to Find The Wisdom of God