What do we mean by genuine repentance?, Many times we see people confessing their sins to God and promising Him never to go back to them again, but as soon as they leave the altar of repentance, they begin to live their lives as before. This suggests that their repentance was not genuine.
2 Corinthians 5:17 says: “Therefore if any man be in Christ he is a new creature: old things are passed away; behold all things are become new.”

Here are 15 examples of genuine repentance

David’s Repentance After His Sin With Bathsheba – Psalms 32 And 51
The number one of 15 examples of genuine repentance is the story of David,  This is a famous story in the bible. This story was written after  David did something very wrong.  What did he do? He saw a woman bathing and he wanted to have sex with her. But she was the wife of Uriah. Her name was Bathsheba. Uriah was away in the army, so David sent his servants to bring Bathsheba to his palace where he live as a king. David and Bathsheba had sex together. Later Bathsheba told David that she was going to have his baby. So David brought Uriah home.
He tried to make Uriah have sex with Bathsheba so that Uriah would think that the baby was his. When Uriah would not do it, he sent Uriah to a dangerous place to war with the Philistines. The Philistines killed Uriah. David then married Bathsheba.
After  the baby was born it only lived for a week. Then Nathan the prophet came and told David that he had done wrong. At first, David did not say that he was sorry. This made him feel very bad. So he wrote Psalm 32. Later he wrote this psalm as well. Psalms 32 and 51 are 2 of the 7 Penitential Psalms that the Church often sings during Lent. Lent is the 40 days before Easter. 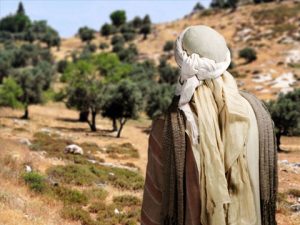 There is no way we would of conclude this 15 examples of genuine repentance with out the prodigal son.
Jesus told the story of the lost son in Luke 15:11-32: of a certain man who had two sons. The younger one said to his father, ‘Father, give me the portion of goods that falls to me.’ So he divided to them his livelihood.
Not many days after, the younger son gathered all together and travelled to a far country, and there wasted his possessions with prodigal living. But when he had spent all, there arose a severe famine in that land, and he began to be in want.
“Then he went and joined himself to a citizen of that country, and he sent him into his fields to feed swine. And he would gladly have filled his stomach with the pods that the swine ate, and no one gave him anything.
Later when he came to himself, he said, ‘How many of my father’s hired servants have bread enough and to spare, and I perish with hunger!
I will arise and go to my father, and will say to him, “Father, I have sinned against heaven and before you, and i am  no longer worthy to be called your son. Make me like one of your hired servants

And he arose and came to his father. But when he was still a great way off, his father saw him and had compassion, and ran and fell on his neck and kissed him.

Peter’s denial of the Lord Jesus
Still on number of 15 examples of genuine repentance is story of Christ.
Peter’s denial of the Lord Jesus was a great tragedy.
But Peter had already taken a number of steps toward denial before uttering a single word that disown Jesus Christ. First, he confidently boasted that he would never fall away ( Matt. 26:33 ). Second, Peter disobeyed Jesus by refusing to accept the Lord’s prediction of his disloyalty (v. 35). Third, he was prayerless in the Garden of Gethsemane (vv. 40-41).  Peter compromised himself and willfully went to a place (the high priest’s courtyard) of spiritual danger where his faith could be tested beyond its endurance.
As Peter tried to wait unnoticeably in the high priest’s courtyard, on three occasions he was confronted by other bystanders and accused of being one of Jesus’ followers. Peter’s reaction showed he had lost all sense of reality and awareness of God.
Each accusation was a bit more incriminating and provoked a more forceful denial by Peter. After the third denial, according to the Lord’s providence, Peter’s slide was halted. A penetrating look from Jesus Himself
( Luke 22:61 ) and his remembering of Jesus’ prediction that he would deny Him three times were enough to bring Peter to his senses. As our verse explains it, “he went out and wept bitterly.”

Noah – Genesis 6-8 One of the greatest stories of repentance in the Old
Testament is the story of Noah . God warned of a coming judgment. This was going to be a world-wide punishment.
Those who would repent of their sins and believe in the warnings of Noah were welcome to board the ark before the flood waters began to fall.
After 120 years of preaching the only people who stepped onto the ark were Noah and his family. Though there was room for many more people in the ark, only eight were saved.

Abraham and Isaac – Genesis 22
God asked Abraham to sacrifice his only son Isaac. Throughout the whole process of going to the mountain to sacrifice, Isaac was obedient and Abraham was hopeful.
Abraham fully expected to sacrifice his child on the altar, but he was also confident in the fact that God could raise his child from the dead.
What Abraham did not expect was that God had a completely different plan in mind. Moments before Abraham thrust the knife into his child, God provided a sacrificial ram to take the place of Isaac. God redeemed Isaac with this ram. It is an example of how that God redeems us with the sacrifice of His Son.

The Story of  Ruth – Ruth 1-4
The book of Ruth teaches many lessons. A Hebrew family moved to a foreign land. Ruth married into this family; but, tragically, all the men died. Ruth and her mother-in-law, Naomi, move back to the land of Israel. Ruth then became the foreigner in a strange land.
In an effort to provide for her mother-in-law, Ruth went to gather grain in the fields. She met the wealthy land owner
where she had been working. This man, Boaz, happened to be a near kinsman to Naomi. But, there was another family member who was an even closer relative.
As a close relative, the second man had the responsibility to care for Naomi and Ruth. He even possessed the right to
marry the beautiful young lady. But he neither wanted the responsibility nor the right. Boaz approached the closer
kinsman with the willingness to assume the responsibility for the family and the right to marry Ruth. The man accepted and Ruth joined Boaz in marriage.
The Bible calls Boaz the kinsman redeemer. He bought the responsibility to care for the ladies and the right to marry Ruth.

Potter – Jeremiah 18:1-6
Jeremiah the prophet was instructed to go to a potter’s house. At the house he saw the potter make a pot that was not quite to his liking. The potter pushed the malleable pot into a ball of clay once again. Then he proceeded to remake the pot into something better.
God likened the pot to the people of Israel. He said that He was the potter. God told Jeremiah that as the maker and
molder of the nation of Israel, God had the authority to shape the nation as He pleased.
God’s ownership over Israel means that He cares for them.
Like the potter, God lovingly molds His people into a vessel that He is proud to display.

Lost Sheep – Luke 15:1-7
When the religious crowd of Jesus’ day complained that He was spending too much time with the sinners of society, Jesus told a genuine repentance stories. He started with the story of the lost sheep. “I say unto you, that likewise joy shall be in heaven over one sinner that repenteth, more than over ninety and nine just persons, which need no repentance.” Luke 15:7.
A man owned 100 sheep. But, one day while away from home, one of the sheep was lost. He secured the 99 sheep and went in search of the single lost sheep. He carried the lost sheep gently back to the 99.
Jesus said that the man went home and threw a feast in honor of the fact that his sheep was found.
Jesus’ application to the religious crowd was that lost sheep (sinners) need to be found. There is rejoicing in heaven over their salvation. The ones who are religious and see no need in repentance and salvation will not be celebrated in heaven because they have not received the redemption  provided by Christ.

Saul of Tarsus – Acts 9:1-22
On the road to Damascus, Saul of Tarsus encountered the Lord. Saul knew very well who Jesus Christ was. But up until that time Saul did not believe that Jesus was the Redeemer promised by God. That day, on his way to capture Christians and take them to prison, Saul saw Jesus for who He really was.
The man who had brought so much persecution to the early church was redeemed by the love of Christ. Saul was later known by the name Paul. This is the man who we call the Apostle Paul. He was responsible for spreading the true Gospel of Jesus throughout the known world in his time